This time Im using my friends macbook he gave me that for this tutorial as i use windows and its not really good at adobe programs! so thank you for being an awesome mate!

There’s no doubt that you can create some stunning effects in Photoshop, but it doesn’t all have to be really complicated. In fact, there are all kinds of interesting things that you can do really easily. In this tutorial, I want to show you how you can use a single, grungy texture to bring a really interesting treatment to a typographic design.

To start off, we’re going to need a texture. I’m going to be using this one from the Mega Textures Packthat I released over on the Echo Enduring Blog: 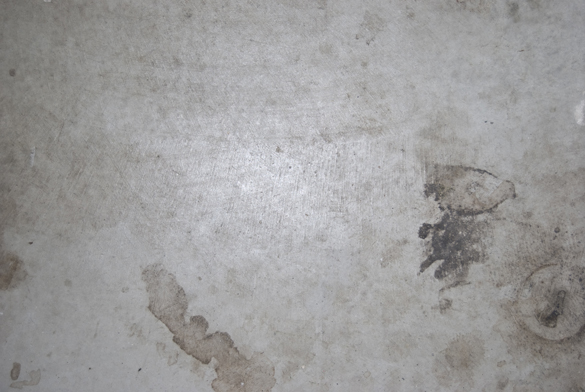 The first thing we need to do is to actually create the typographic design that we will be creating our effect on. To do this, let’s start by making a brand new document, measuring 800px square. Then, open up the Preferences dialog box (Command/Ctrl-K), choose the Guides, Grids & Slices sub section and set the grid to repeat every 20 pixels. 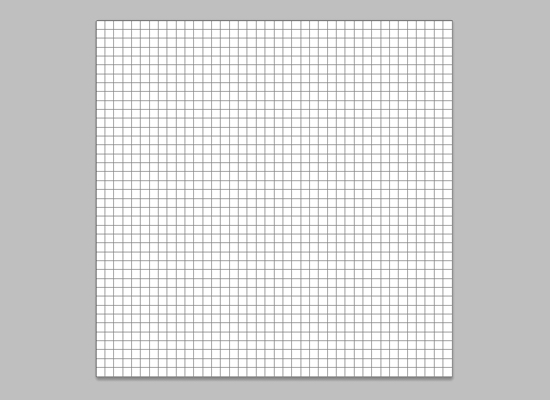 Next, we’ll want to start placing our text. The idea for what we’re going to do here is to create a collage of different words that are all related through a common element. In this particular case, I decided to go with words that are all somehow related to the web. I began like this: 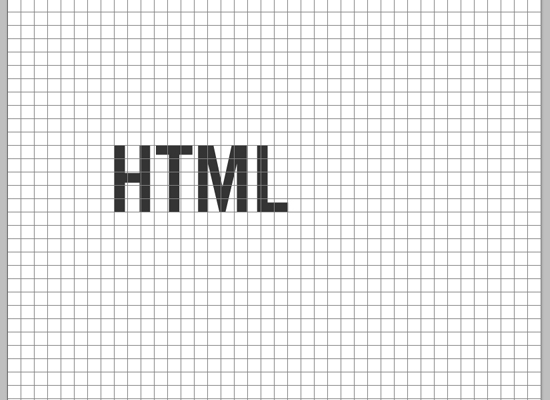 Then I started adding more words in Alternate Gothic, Baskerville and Swiss typefaces, using the grid to keep a reasonably even amount of space between the different words. To help keep everything aligned with the grid, I would also tweak the tracking a little here and there: 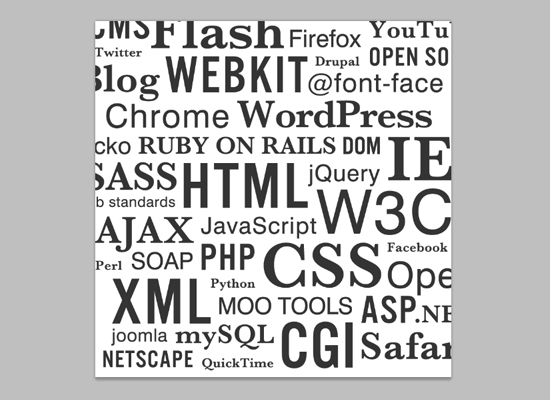 Creating these kinds of word collages can definitely be a very time-consuming and meticulous process, and certainly took the longest amount of time to do than anything else we will look at in this tutorial, but in the end it will be worth it. After all, any effect is only ever as good as the underlying design to which it is applied. So, massaging the type to make it look right is the first key step to making this process work.

After having gone to all the trouble to create the word collage, the next step may seem somewhat counter productive, but stick with me here. We’re going to select all of the different text layers that we have created for the purposes of the collage and merge them all into a single Smart Object.

Next, we actually want to reduce the canvas size to 600 pixels square. Yes, that will end up cutting off some of the words that we’ve included in the previous step, but that’s okay. 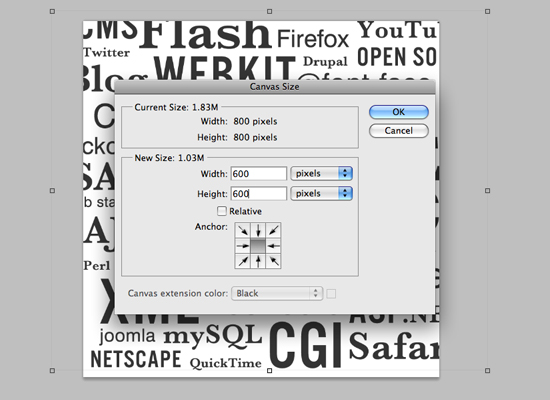 The reason that we want to bring the size of the canvas back down is that we are going to be rotating the Smart Object! By creating the contents larger than the final canvas, we can actually account for this rotation. Otherwise, the corners would be completely empty. Instead, we end up with something like this: 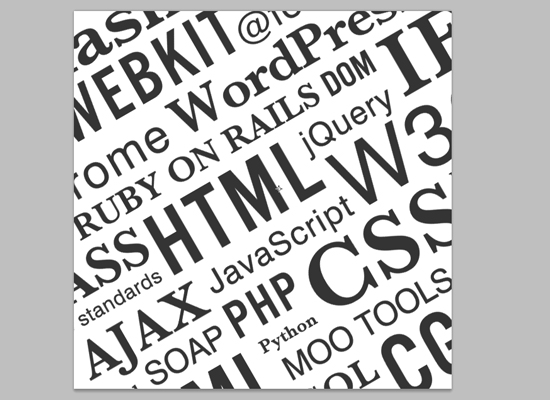 Alright, now that we have the basic design ready, it’s time to start working with the texture. So, go ahead and bring it into Photoshop. You can either open it up in a separate document then cut and paste, or you can place it into the working document as another Smart Object.

Either way, the first thing you will want to do once the texture has been included in the Photoshop document is to duplicate the layer. Drag one copy to the back, so that it is sitting below the text layer. 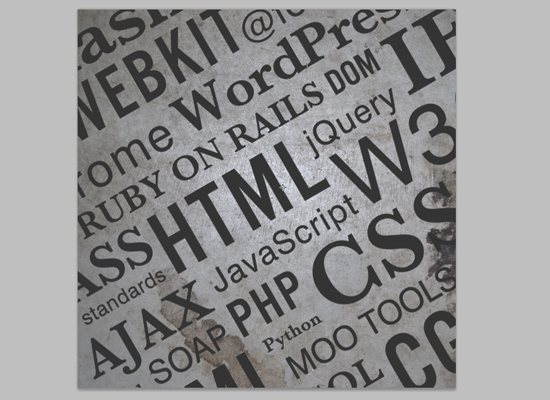 Then, drag the other copy so that it is sitting directly above the text layer. Finally, create two duplicates of the text layer and drag them above the texture layer. This will give us the basic “stack” that we will need to achieve the effect we’re going for here.

Now, just hide everything but the bottom texture. With that layer selected, create a new levels adjustment layer. Move the black slider from 0 to 31 and the grey slider from 1.0 to 0.66. 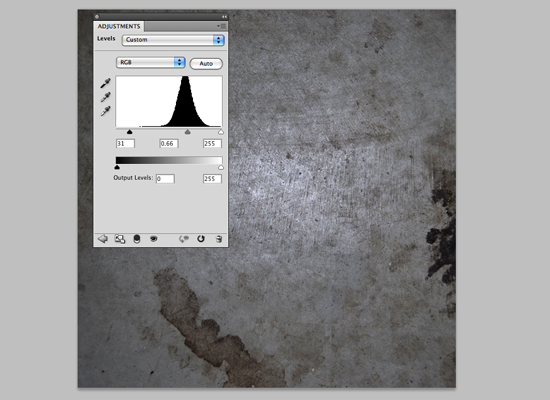 All this really does is to darken up the background for the sake of contrasting it against the text in the next step!

Turn on the main text layer (directly above our darkened background) and the texture layer above that. Right click the texture layer and create a new clipping mask. This will cause our texture to be only applied to the shape of the typographic design directly beneath it. 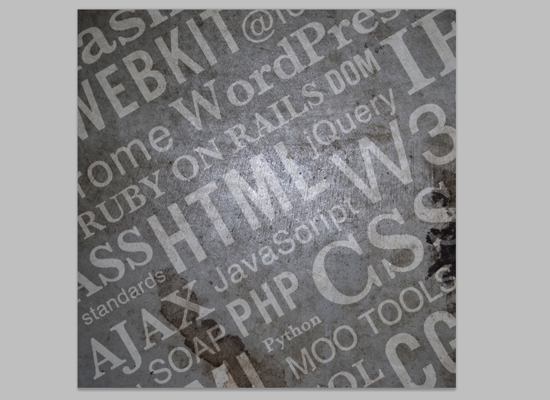 With the contrast between the two texture layers, we can already see the basics of the effect at work here. In and off itself, this has an interesting look to it, but we want to make it stand out even more, let’s use a drop shadow. Yes, in the wrong hands the drop shadow can be dangerous and amateurish effect, but when used properly it can also be incredibly powerful.

To create our drop shadow reveal and select one of the extra text layers that we created and reduce its fill value down to 0. If you’re not familiar with this technique, it may seem to be the exact same thing as reducing the opacity. It’s similar, but the key difference is that, while changing opacity levels will affect layer styles, changing fill levels won’t. This allows you to separate multiple effects on to different layers, which suits our purposes her perfectly.

Create a new drop shadow layer style, and use the settings shown here. You’ll want a distance of 4, a spread of 5, and a size of 10. Additionally, drop the opacity down to 65 and the angle to -14 degrees. Finally, be sure that the Global Light option is turned on. 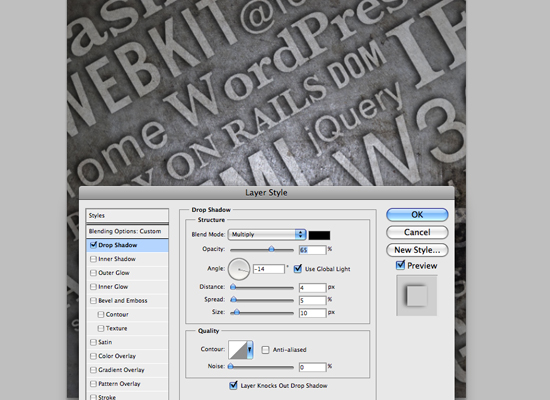 This will add a broad shadowing effect to all the text, helping to create the illusion of depth. We’ll round this illusion off with another often-avoided layer style—Bevel & Emboss—and place the effect on our second duplicate text layer, so that it is kept separate from our drop shadow (you’ll see why below). Create a Bevel & Emboss layer style with this options: 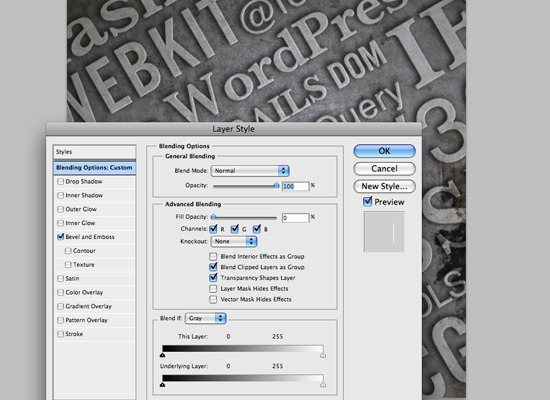 As long as you keep the Global Light option turned on, this will create a nice, thin highlight along the opposite edge from of the text from the shadow, further adding to the overall illusion of depth.

That’s the bulk of the work done. We’ll just want to add a couple more quick effects in order to really round it out. First, let’s add a bit of a vignette shadow effect. The simplest way to do this is to just create a new layer and fill it with a black and white radial gradient like this: 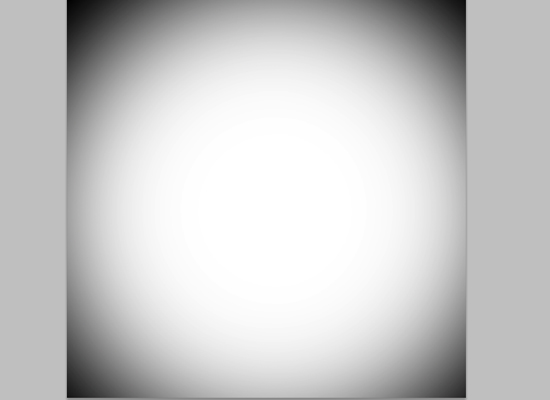 Then, just set the blending mode of the layer to multiply and reduce the overall opacity down to 50% to get an overall image that looks like this: 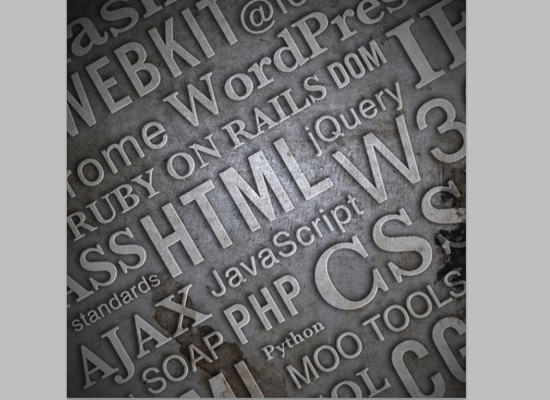 Now we’ll add just a really soft and basic lighting effect in the center. Start by creating a new layer and setting the foreground colour to white. On the new layer, paint over the center of the document. Then use a Gaussian blur to soften the entire thing, like this: 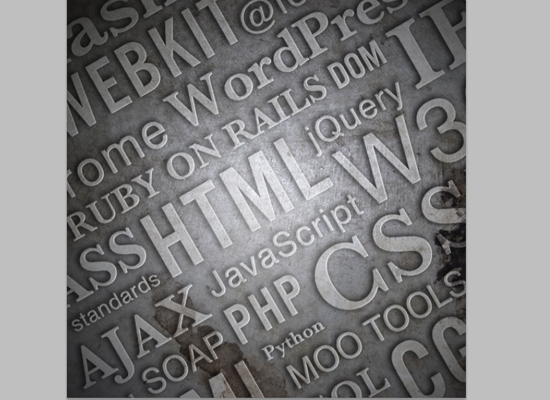 Finally, set the blending mode to overlay and bring the opacity down to 50% again. 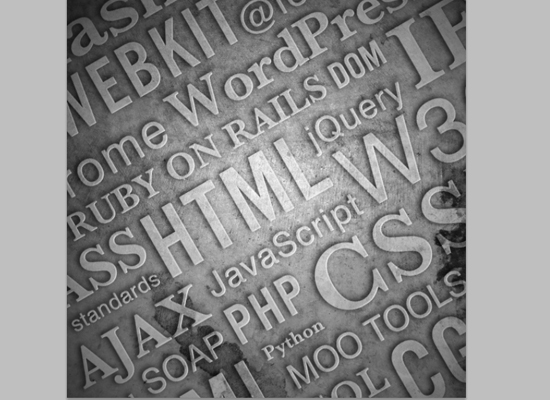 This will basically cause the highlights to fade away in the corners where we have the deepest shadow, helping to very subtly improve the overall look of the lighting effects.

About the author admin