Twitter Bootstrap can be considered as backbone of web development as it is one of the most popular front end framework amongst developers for building effective and useful web applications. It is enriched with myriad of features – 12 column responsive grid, dozones of components, javascript plugins, typography, form controls and even a web-based customizer to make Bootstrap your own. 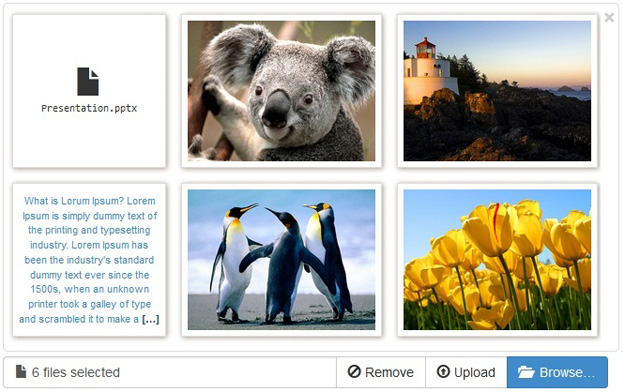 An enhanced HTML 5 file input for Bootstrap 3.x with file preview for images and text, multiple selection, and more. The plugin enhances these concepts and simplifies the widget initialization with simple HTML markup on a file input. It also offers support for multiple file preview and previewing both images and text types. 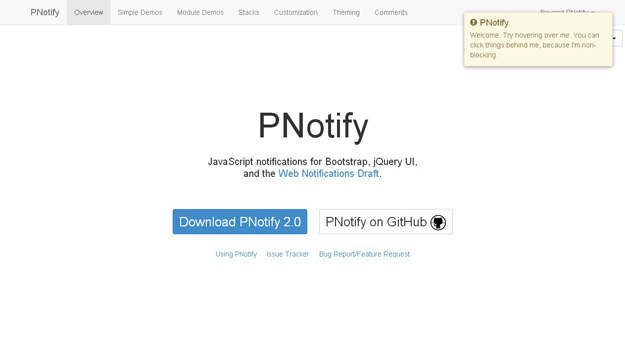 PNotify is a JavaScript notification plugin, developed by SciActive. Formerly known as Pines Notify. It is designed to provide an unparalleled level of flexibility, while still being very easy to implement and use. It can provide non-blocking notices. This allows the user to click elements behind the notice without even having to dismiss it. PNotify uses either Bootstrap or jQuery UI for styling, which means it is fully and easily themeable. T 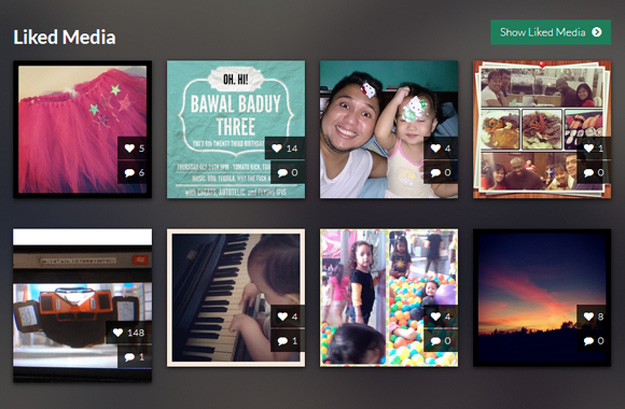 Pongstagr.am is a jQuery plugin that lets display your instagram media to your website using Bootstrap Front-end styles and modal-plugin. For the most part, Instagram’s API only requires the use of a client_id. A client_id simply associates your server, script, or program with a specific application. However, some requests require authentication – specifically requests made on behalf of a user. 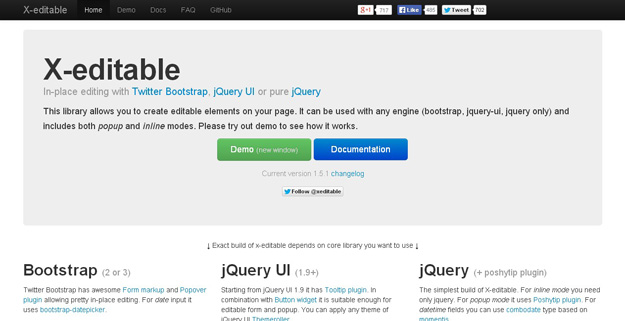 X-editable supports in-place editing with Twitter Bootstrap, jQuery UI or pure jQuery. This library allows you to create editable elements on your page. It includes both popup and inline modes. It’s new life of bootstrap-editable plugin that was strongly refactored and improved. It supports input type like, text, textarea, select, date, dateui and checklist. It supports client-side and server-side validation. The container placement is fully customizable. User can toggle by click, dblclick or manually. It works in IE7+ and all modern browsers. 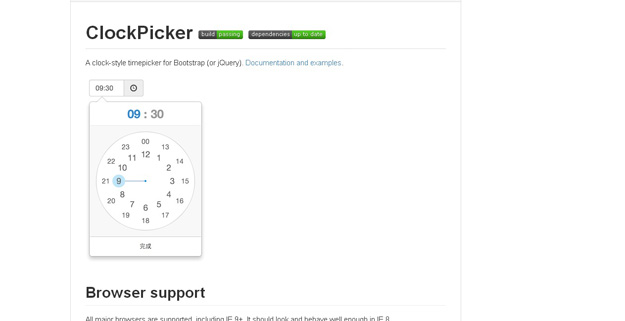 A clock-style timepicker for Bootstrap a jquery plugin.Both desktop and mobile device are supported. It also works great in touch screen device.All major browsers are supported, including IE 9+. It should look and behave well enough in IE 8. 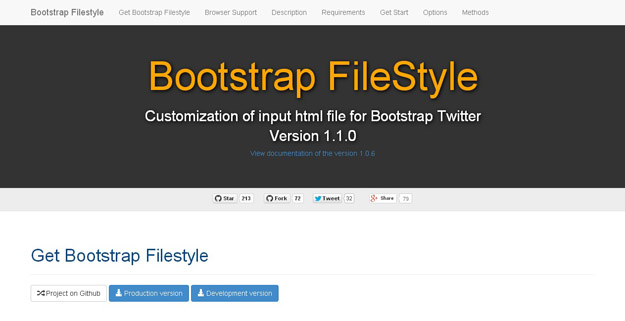 The Bootstrap Filestyle is a plugin for jquery-based component library could Twitter Bootstrap, used to style the file fields of the forms. This plugin has an interesting way to present a form for sending files so attractive, while being simple and efficient. 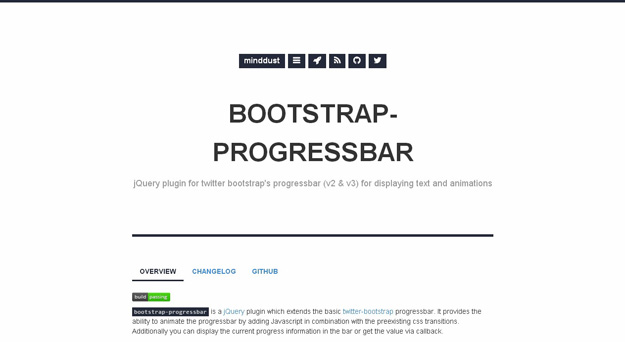 bootstrap-progressbar is a jQuery plugin which extends the basic twitter-bootstrap progressbar. It provides the ability to animate the progressbar by adding Javascript in combination with the preexisting css transitions. Additionally you can display the current progress information in the bar or get the value via callback.

A simple yet powerful JQuery star rating plugin for Bootstrap which supports advanced features like fractional star fill and RTL input support. Developed with a focus on utlizing pure CSS-3 styling to render the control. The plugin uses Bootstrap markup and styling by default, but it can be overridden with any other CSS markup. 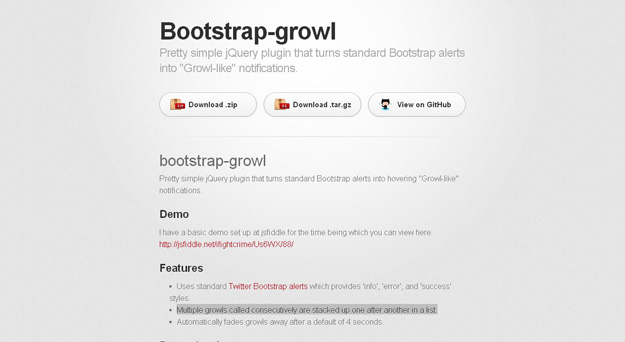 Pretty simple jQuery plugin that turns standard Bootstrap alerts into hovering “Growl-like” notifications. It has number of features such as it uses standard Twitter Bootstrap alerts which provides ‘info’, ‘error’, and ‘success’ styles, and multiple growls called consecutively are stacked up one after another in a list.

This jQuery plugin simplifies the usage of Bootstrap Pagintion. It uses appropriate classes:.pagination (you change this one), .active and .disabled. 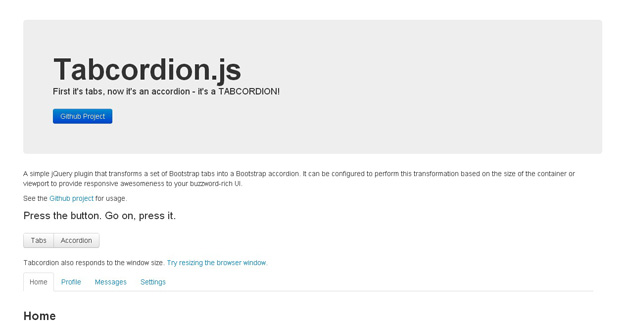 A simple jQuery plugin that transforms a set of Bootstrap tabs into a Bootstrap accordion. It can be configured to perform this transformation based on the size of the container or viewport to provide responsive awesomeness to your buzzword-rich UI. 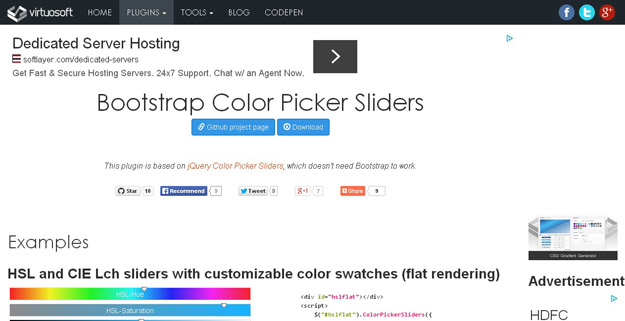 A Bootstrap 3 optimized advanced responsive color selector with color swatches and support for human perceived lightness. Works in all modern browsers and on touch devices. 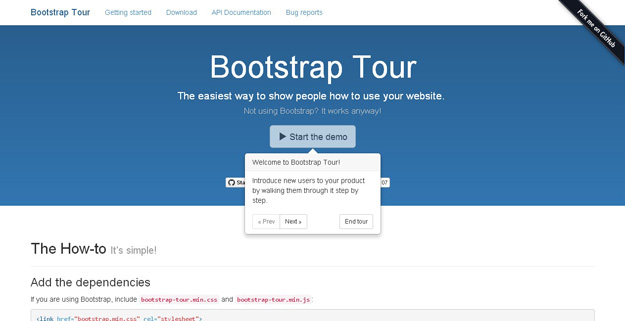 Quick and easy way to build your product tours with Twitter Bootstrap Popovers.This library does not depend on the full Bootstrap package. The only dependencies are the tooltip and popover files.Bootstrap Tour saves the current step and will not display the tour again to users who have already completed it. 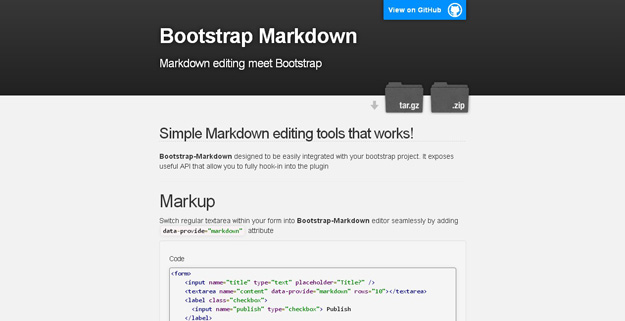 Simple Markdown editing tools that works. Bootstrap-Markdown designed to be easily integrated with your bootstrap project. It exposes useful API that allow you to fully hook-in into the plugin. 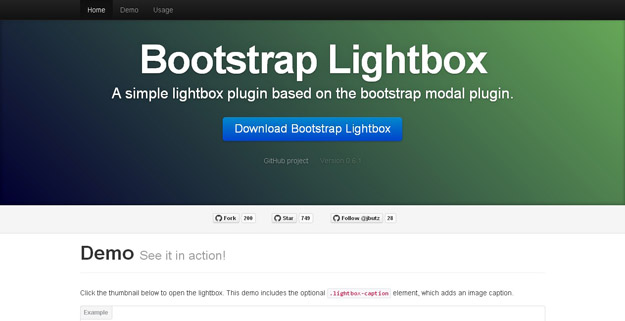 A simple lightbox plugin based on the bootstrap modal plugin.

Tagged with: Bootstrap Plugins for Developers